Let's start from scratch, as for some of the readers (who've spent the last two years on Mars) this might be your first encounter.

The IOIO-OTG is a printed circuit board for electronics hobbyists and prototypers, which addresses a very common problem: how do I use my {computer, tablet, phone} to control my {robot, dish-washer, cat-feeder, etc.}. The original IOIO board was the first to offer a complete solution to this problem for Android devices. The IOIO-OTG adds PC support (Windows, Linux, OSX). 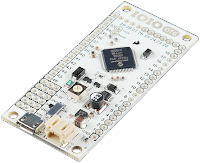 Unlike most other solutions, requiring you to write two pieces of software (board and client), at least one of which is typically complicated, the IOIO takes a different approach, by only requiring you to write the client-side (Android, PC) software, using a high-level programming language (currently Java) with a rich and intuitive API that allows you to manipulate the I/O pins and hardware peripherals on the board, giving you the experience that those I/O capabilities are actually an integral part of your client machine. This feature of the IOIO makes prototyping and development with it very fast and simple. Another great selling point is that it can work with virtually any Android device, even very old ones (Android 1.5 or higher), while most other boards would only work with the latest and greatest.

You can connect the IOIO to its client either over USB or over Bluetooth (using a standard dongle). The pre-installed firmware and the provided software library completely hide away the gory details of the underlying connection. The same code you write will work over either connection type seamlessly.

The IOIO-OTG is significantly smaller in size and/or cheaper and/or richer in features than alternative solutions. For example, in the Android world, the IOIO-OTG's I/O specs are comparable with an Arduino Mega ADK at a fraction of the size and cost and with all the software advantages mentioned above. In the PC world it would provide an attractive competition as well to boards of similar capabilities, and once again, the savings on software development time are huge.

To make it super-loud-and-clear: I'm not making a case that IOIO-OTG is better than Arduino or vice-versa. Arduino is awesome for what it's good at, which is IMHO for standalone operation. The IOIO boards were never intended to work standalone, but excel when it comes to offering I/O to an existing machine that lacks it. There is an ever increasing number of applications that fall into this category, especially due to the attractiveness of using Android devices in physical computing applications, getting tons of sensors, internet connectivity, lots of computation power, touch screen, etc. in a cheap, easy to use package.

The IOIO-OTG is all open-source, software, firmware and hardware. The development has been an ongoing process, with new features and bug fixes introduced on a regular basis. New versions of firmware are distributed in a way that makes it very simple for the user to upgrade: connect the IOIO-OTG to a PC and run a simple program to flash the latest version, or your own custom one if you're into such adventures. Download the software package with libraries and examples from the website and you're good to go.

That's what we're here for, aren't we? Here are the main features:
For those who know the IOIO V1, the main changes are the dual-role stuff, the beefier 5V regulator and two less I/O pins. There's also improved circuitry for cleaner analog input and better protection against user error (you can still fry it if you really want to :D)

My main goal in this project is to make it available and useful for as many people as possible. Really. No marketing BS here. This is not my day-job. One of the key factors in meeting this goal (assuming the product is great, of course) is making it affordable for as many people as possible. Making it cheaper also means people will be less frustrated if they happen to fry the board, and make people feel more comfortable leaving the board permanently attached to their project and buying a new one for the next project.

In that, I feel that I have yet to improve. We set our goal at $30 end-user price. It is currently about $40, and during the struggle to cut costs I decided to forego my own royalties of the product. I'm not particularly happy about it, to be honest, but I feel like I have done the right thing. I'm currently considering my options for how to reduce the end-user price while leaving a little something for myself too.

Luckily, I didn't do this alone!
Aaron Weiss from SparkFun took part of the board design and walked me through the winding road of getting a product out the door.
David Stadler designed the beautiful new graphics, which preserves (and improves) the yo-yo from the IOIO, but gets rid of the only-for-Android feel.
Kustaa Nyholm contributed his PureJavaComm library to the community, which opened the door for easy PC integration.
All the IOIO users, who are slowly turning into a nice community, gave me all the inspiration and motivation to keep working when things went the hard way.
My dear wife, kids and friends, who gave me the huge amount of support required for such a project and for patiently listening to my boring geeky stories all along.