The Second Generation of IOIO is in the Works

It's been a little over a year since IOIO has been released. During this period it has been used by thousands of users world-wide, who published tens of amazing projects. IOIO has become the first and leading product for interfacing Android with external hardware. Several software / firmware upgrades have been successfully rolled out, which added new features and fixed bugs. Two different manufacturers (SparkFun, Jaycon Systems) currently make IOIOs and an alternative form factor boards from SeeedStudio are just starting to sell. A book has been published on making Android accessories with IOIO. I've given a few workshops on IOIO, one of which at the MIT Media Lab, which has always been a dream place for me. Quite a trip! I was expecting something much more modest when I started, but happily jumped on the train.

Why a New Version?

During the whole time, I've been constantly gathering user feedback and looking at other products in the same field and have kept asking myself "what is the most important thing to do next?". Eventually, two main points started to emerge, that could not be addressed by software alone:


It became apparent that there's enough motivation for a second generation. And so I started! SparkFun were as great as always, and have been very supportive on both goals.

The next generation of IOIO will be a USB on-the-go (OTG) device. What this means in practice, is that the new IOIO will be capable of acting either as a USB host (like the current IOIO) or as a USB device (allowing it to connect to a PC as well as be powered by it). Moreover, it will be able to auto-detect which is the right role, according to whichever cable is connected to it (a micro-A or micro-B).
Making the IOIO an OTG device required some modifications to the power-supply module. While I'm at it, I've managed to design a module that is both cheaper and beefier (2A) than the current one. It will also have a resettable protection fuse and will handle current limiting more elegantly than the current IOIO (which simply has a resistor on the VBUS line).
I considered upgrading the microcontroller, but was happy to find out after searching a little, that the current one (PIC24F) is one of the most peripheral-rich micros out there if not the richest. Since this is the most important aspect of the microcontroller for this application, I decided to leave it alone. Other than that, I've made a few more nice-to-have changes, such as reducing the noise on the analog inputs and reorganizing the power supply pins in a more accessible way (having GND next to each supply).

In order to save time and money, and according to my beloved tradition, I made the first prototype by home-etching. In this case, I took an old IOIO and gave it a heart transplant to replace all that needed replacing. I wish there was an "ugly but works" contest... 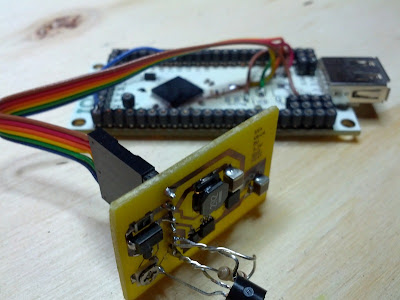 Then it's software time! The firmware took some time to develop, but it is now close to completion. The IOIOLib part was the most fun. It ported from Android Java to PC Java totally smoothly. Finally, just in time for Maker Faire, I finished a fully functional demo, in which I'm running HelloIOIO on a PC, and controlling the IOIO LED over USB or Bluetooth!
SparkFun also moved quickly, and provided me with the "pretty but doesn't work" prototype pictured at the top of this post. The "doesn't work" part is probably the fault of my soldering, though :D. But it was working enough for demonstrating the new USB device functionality at Maker Faire.
So we're probably a couple of months away from production and official launch. It is possible that the initial release will ship new hardware, but with software only capable of USB host and I'll release the device mode in Beta first. Not sure yet. We shall see depending on my estimate of the risk at the time of launch.

I'd like to thank all of the users for their trust, support and feedback; to thank SparkFun for being the most awesome partners on the planet and most of all to thank for my family for putting up with my crazy hobbies and excessive work hours.