My oldest son is almost seven years old. Seven is right about when I got my first Atari 800XL and learned to program. Today's kids have much cooler choices for computers. Personally, I think that the ability for programs to interact with the physical world makes a huge difference in motivation. 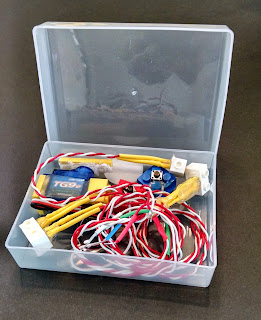 I recently backed up a Kickstarter campaign for the Espruino Pico. While being "yet another" small microcontroller-based board, this one has quite a neat software stack: it runs a JavaScript interpreter and exposes a very extensive JavaScript API for controlling its I/O. I was thinking this would make a great tool for super-quick hacks that I sometimes need for testing purposes / one-off tooling. But quickly it dawned on me that this would be a perfect way to get my son into programming! The Espruino has an IDE that is a Chrome extension with Blockly support, allowing us to code without having to do much typing and without risking syntax errors (which is often a big source of frustration for beginners). I also found that it was fairly easy to add new blocks, so I quickly made a couple of useful ones (for example, there wasn't a stock block for controlling a servo).
And so we've been playing for a while, controlling the on-board LEDs with the on-board button, and later adding a servo motor. But blinking LEDs and moving a servo for their own sake gets boring after a while. Luckily, the tooth-fairy has kindly provided us with a kit of accessories which greatly extends the possibilities! Since my son loves Legos (who doesn't?), my idea was to allow him to embed the I/O devices in his creations. Not a new concept, but mine was totally DYI, taking only a few hours of work in my garage and costing next to nothing.
The kit I made (shhhhh, don't tell it was me!) contains: 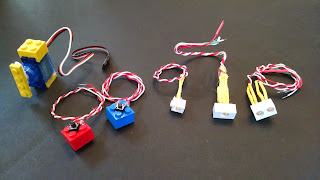 I'm really happy with the result and if it works out well I can easily add more pieces.
Here's what happens when you let dad play with the kids' toys...