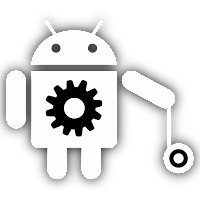 Exciting news once again, folks!
Since the original design of IOIO, it was planned to make it capable of upgrading its own software, by pulling updates from the Android device it is connected to. This gives a lot of flexibility for where the upgrades come from, be it the Web, a file containing custom firmware that a user has built or even embedded inside an Android application that needs the IOIO to behave in some non-standard way.
To achieve that, the IOIO firmware included a bootloader, which kicks in on every IOIO restart and checks for new firmware. For security purposes, it has been decided that the bootloader will only get its upgrades from a single application, called the IOIO Manager, and check that this application is authentic by enforcing it to be signed be the official IOIO key (i.e. by me). Alas, this IOIO Manager had not yet been born when IOIO was first released, and this cool feature, although available on every IOIO firmware, remained dormant. Until yesterday, that is!
The IOIO Manager application is now available on the Android Market. Install it by scanning the QR code below or by clicking it: 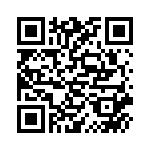 This is the most common use case: the IOIO Manager application lets you maintain a library of application images, and then choose the one you want installed on the IOIO at any point in time. Once selected, the IOIO will pull this image after its next restart. This takes less than two seconds and does not require any additional hardware (such as a programmer).
To remove all doubt: this upgrade mode works great with the existing bootloader version, which all current IOIO owners have. At least in the near future, the bootloader is not expected to change, and those users are able to use IOIO manager to receive upgrades!

The bootloader cannot upgrade itself by design. This is in order to protect the user from accidentally bricking the board by installing a faulty image that renders the bootloader invalid. My original thought was that the bootloader will never have to be modified anyway. Errrrr, wrong! When designing the bootloader I figured that since the bootloader already contains all the code for establishing an ADB connection to the phone, it might as well provide this service to the application and save the code duplication. While this seemed reasonable enough back then, I overlooked something important - what if the application wants to use some other protocol over USB? One example is of course Open Accessory. Moreover, what if I found a bug in the bootloader, or want to introduce an optimization? Bottom line - we need a way to upgrade the bootloader from time to time and for that we must have a programmer.
Wait, what?
But the SparkFun page specifically used to say "you'll never need a programmer", until we figured out this is true only 99% of the time. And yes, we could just fix the bootloader design bug and have the new units shipped with a better bootloader, but what about the users that already bought it and don't have a programmer? I wanted to be as fair as possible to these people who were first to believe in my product, so I decided to go the extra mile...
So you need a programmer, no doubt about that, but who said you need an off-the-shelf programmer? Let's make one out of a IOIO! And so I did. And it works! So right now, if you want to reprogram your IOIO's bootloader, all you need is another IOIO, be it your friend's or your fellow hacker. Well, people can still argue this is not a free solution in all cases, but I hope they will appreciate I really did anything I could to make things better for them.
Here's what it looks like when one IOIO programs another:
Simply connect 5 wires (two of which are supply and ground) between them, select the image and go! 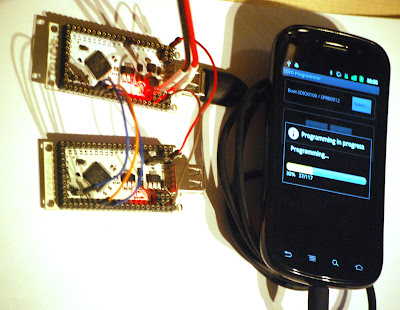 First, this new feature opened the gate for me to start pushing new features to IOIO on a regular basis. Some of which have been itching me to release for quite some time.
Next, this allows people interested in modifying the code running on the IOIO to do so very easily as well as to distribute the firmware they are producing for others to install with no trouble. I'm really curious to see what will come out of this.
For more information, read the detailed guide to the IOIO Manager on the IOIO Wiki.

P.S. in retrospect I realized this is a homage to an older project of mine: AVR programmer using the PICMAN (the great-grandfather of the IOIO)
Posted by Ytai at 1:05 AM